With comet landing, mysteries may be solved – Boston Globe

In a technological feat that gives scientists their first opportunity to dig into a remnant of the early solar system, the European Space Agency’s Rosetta mission successfully placed a small spacecraft on the surface of a speeding comet on Wednesday.

With this achievement, a comet is no longer a mysterious and sometimes frightening spray of light across the night sky, but another member of the solar system to be explored, like the moon and Mars. The technology of landing on a comet, with its wisps of gravity, could be applied to future efforts to mine asteroids.

The agency’s director-general, Jean-Jacques Dordain, described the touchdown on Comet 67P/Churyumov-Gerasimenko, a 2.5-mile-wide ball of rock, ice and dust moving faster than 40,000 mph, as “a big step for human civilization.”

“Our ambitious Rosetta mission has secured another place in the history books,” Dordain said at a news conference. “Not only is it the first to rendezvous with and orbit a comet, but it is now also the first to deliver a probe to a comet’s surface.”

RELATED | Graphic: How to land on a comet

For scientists, one of the key mysteries that Rosetta will explore is whether Earth’s oceans are filled with melted comets. Since the rocky bits that came together to form the planet were dry, water has to have come from somewhere else. One possibility is that comets slamming into the Earth early on seeded it with water.

Continue reading it below

The European Space Agency’s ambitious attempt to place a spacecraft on the surface of a comet succeeded.

“We’re there and Philae is talking to us,” said Stephan Ulamec, the manager for the lander. “We are on the comet.”

With that news, a procession of officials from nations and organizations, including NASA, that had collaborated on the $1.75 billion mission reveled in the accomplishment, capping a 10-year, 4-billion-mile trip.

“How audacious!” said James L. Green, the director of NASA’s planetary sciences division. “How exciting! How unbelievable to be able to dare to land on a comet.” 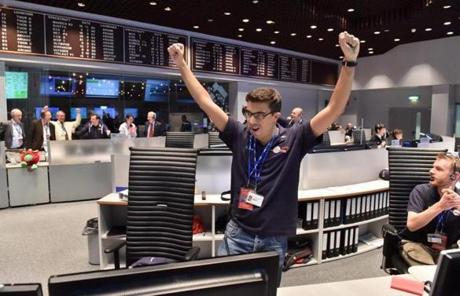 Within the hour, though, a worrisome caveat came to light.

Two harpoons that should have fired into the comet did not, and the lander may not be secured to the surface. Ulamec said fluctuations in the radio link and the generation of power by the solar panels suggested that Philae may have bounced off the surface before settling down again.

“Maybe today we didn’t just land once, we even landed twice,” Ulamec said.

As expected, the Rosetta orbiter moved out of the line of sight of Philae, breaking radio communications.

The orbiter is to re-establish the radio link in the next day, and mission managers hope then to better understand the stability of Philae’s footing.

Nonetheless, the lander and its 10 instruments have begun 64 hours of scientific operations before its batteries drain. Solar panels will recharge the batteries, allowing intermittent operations over the coming months, about an hour every two days.

The landing culminated a tense day as Rosetta maneuvered to the correct position to let Philae go. Moments of celebration were interspersed with long, quiet stretches of waiting.

The operation proceeded despite a few small glitches and one potential showstopper problem: failure of a thruster that was to fire after touchdown to press the lander against the comet’s surface. A pin was supposed to break a wax seal on the gas tank, but repeated attempts did not succeed.

Without the thruster, the washing machine-size Philae would have to rely on ice screws on its landing legs and the harpoons to anchor it to the comet. The thruster, which was to shoot a stream of nitrogen gas, was intended to counteract not just the possibility of Philae bouncing off the surface but also the upward kick from the firing of the harpoons.

Mission managers decided to proceed, because there was no way to repair it.

Philae detached on schedule, for a seven-hour descent.

There was some worrying a couple of hours later when the lander was about 10 minutes late in re-establishing communications with the orbiter.

Mission managers could not do anything; the readings they saw on their computer screens reflected what had occurred 28 minutes earlier — the time it took a radio signal to travel the 316 million miles from Rosetta to Earth.

But soon they received photos — a blurry image of Rosetta’s solar array taken by Philae about 50 seconds after separation, and then a sharper image by Rosetta of the descending Philae.

“We see the lander going down on the right track,” said Andrea Accomazzo, the flight director.

Then there was more waiting, with amusing updates via the Twitter accounts of Rosetta and Philae.

The Web comic XKCD also provided real-time updates, even mentioning the problem with the nitrogen thruster. In the comic, Rosetta told Philae that mission control was worried about the thruster, and the lander responded, “I really hope harpoons work on comets.”

The harpoons turned out to be a valid concern.

“There are some indications that they might not have been fired, which could mean that we are sitting in soft material and we are not anchored,” Ulamec said. “We have to analyze what is the actual situation.”

For now, Philae is working and the instruments have already sent back some images and data. But if it is not anchored, Philae may not operate as long as hoped — the original goal was next March — as emissions of dust and gas grow as the comet moves nearer to the sun.

Even if the lander cannot complete the full mission, managers have said, Rosetta will still be a resounding success. Planetary scientists have never looked at a comet so close up for so long.

Comets are frozen leftovers from the formation of the solar system. Rosetta is named after the Rosetta Stone, the engraved block that was crucial in deciphering Egyptian hieroglyphics, and scientists hope the spacecraft’s observations will offer important clues to how the solar system came together 4.5 billion years ago. (Philae is an island where an obelisk provided clues to solving the Rosetta Stone.)

Previous spacecraft missions have zoomed by comets at high speeds, providing only brief examinations. By contrast, Rosetta will be a constant companion as Comet 67P approaches the sun, swings around and heads out again, its instruments potentially providing more than two years of data. 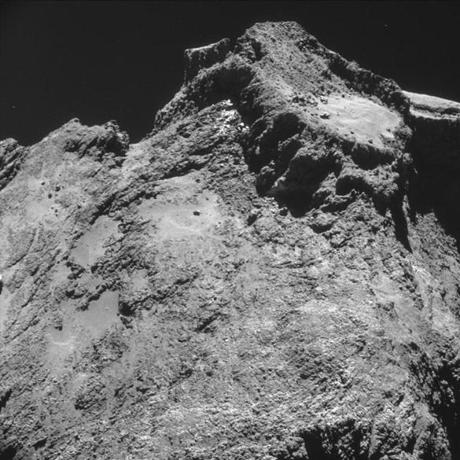 The picture taken with the navigation camera on Rosetta and released by the European Space Agency shows a raised plateau on the larger lobe of the comet.

Geir Moulson in Berlin contributed to this report.