“He’s just what we needed, someone to lift Kenyans’ spirits after the terrorist attacks we’ve had. I have a sense of peace and calm just watching him.”

May my visit to Africa be a sign of the Church’s esteem for all religions, and strengthen our bonds of friendship.

Humility, service to the poor

Francis arrived in Kenya on Wednesday for his first papal trip to Africa — one that will take him to Uganda, and the conflict-ravaged Central African Republic.

His time in Nairobi so far has highlighted two issues close to his heart: humility and service to the less fortunate.

During Mass, he called on citizens to reach out to the downtrodden.

“I appeal in a special way to the young people of the nation,” he said. ” … May you always be concerned for the needs of the poor, and reject everything that leads to prejudice and discrimination, for these things, we know, are not of God.” 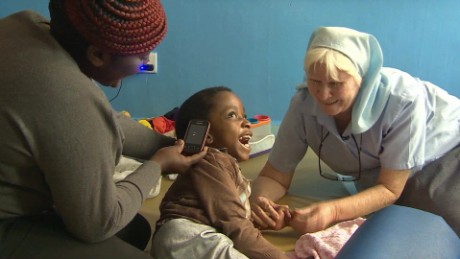 Pope Francis’ arrival in Nairobi was itself a lesson in humility.

He rode from the airport in a small gray Honda, dwarfed by a convoy of shiny SUVs and sleek Mercedes carrying Kenyan officials.

“His ride was the kind of car Kenya’s affluent would not even accept in the exclusive membership clubs or the leafy gated communities,” Kenya’s Standard newspaper wrote on its website.

His visit will include a stop in Kangemi, a shantytown in Nairobi.  In the Central African Republic, he will visit a refugee camp.

The Pope’s message of hope, peace and reconciliation will reach out to a continent with the faith’s fastest growing population.

“The Catholic population there (Africa) has grown by 238% since 1980 and is approaching 200 million,” aid Bill O’Keefe, a vice president at Catholic Relief Services, a church-affiliated U.S. humanitarian group that does work in Africa.

Francis’ predecessor, Pope Benedict, also visited several countries in Africa.  During his nearly three decades in the papacy, Pope John Paul II also made dozens of trips to the continent.

Like most countries, the nations he’s visiting have their own narratives of success and heartbreak.

Kenya and Uganda have been victims of Islamist militant group Al-Shabaab, which has unleashed terror and mayhem in those countries, together with Somalia, where it’s based.

His visit comes as dispirited Kenyans condemn their leaders over a series of corruption scandals, and Islamist militants’ repeated attacks that have killed hundreds in recent years.

The Pope urged Kenyan leaders to be transparent and ensure equal wealth distribution to stop youth from radicalizing.

“Experience shows that violence, conflict and terrorism feed on fear, mistrust, and the despair born of poverty and frustration,” he said.

He also called for the protection of traditional family values and children, whom he called a blessing.

After Mass, he headed to the Vatican Embassy, and will later meet with clergy before visiting United Nations offices.

Aside from visiting a region that will shape the face of the Catholic Church, the Pope’s plan to stop at a mosque in the Central African Republic sends a powerful message.

In the Central African Republic, a Muslim rebel group overthrew the Christian president two years ago, prompting reprisal attacks by both Christian and Muslim militia.

Those attacks continue to this day, and have displaced hundreds of thousands of people.

“May my visit to Africa be a sign of the Church’s esteem for all religions, and strengthen our bonds of friendship,” Francis tweeted.