Thousands of protesters rallied at City Hall Saturday amid heavily armed police and National Guard troops, but the mood was more celebratory than tense.

Demonstrators who marched toward Baltimore’s City Hall on Saturday held a moment of silence at a city intersection for Freddie Gray, a 25-year-old black man who died after being seriously injured while in police custody last month. (May 2)
AP

: Protesters march from the Gilmor Homes, where Freddie Gray was arrested, to City Hall on May 2, 2015 in Baltimore for a rally.(Photo: Andrew Burton, Getty Images)

BALTIMORE — Thousands of protesters rallied at City Hall on Saturday amid heavily armed police and National Guard troops, but the mood was more celebratory than tense following the state prosecutor’s decision to charge six police officers in the death of Freddie Gray.

Marching through the streets, demonstrators held signs that read, “Racism is a disease,” “It is right to rebel,” and “Stop racist police terror.” Many shouted “We have voices” and “12 jurors for Freddie.”

Gray, a black male, died of spinal injuries suffered while in police custody April 12. His death led to 10 days of protests, which turned violent Monday after his funeral. Clashes between police and protesters prompted the arrests of more than 200 people and injuries to at least 20 police officers.

Saturday’s rally was the first large-scale, organized gathering since the felony charges — ranging from assault to murder — were announced in the Gray case.

A National Guard truck drives by protesters May 2, 2015, one day after Baltimore authorities announced charges against 6 police offices in the death of Freddie Gray, a 25-year-old black man who died in police custody. (Photo: Patrick Smith, Getty Images)

While largely celebratory, it also reflected a sense of frustration over the circumstances of Gray’s death and a desire for convictions in the case.

Arica Coleman, 53, a college professor, made the hour-and-15- minute drive from her home in Newark, Del., for the rally. She said blacks have been fighting for equality and an end to racism for years and isn’t sure when the justice they’ve long pursued will be fully realized.

“When you look at the civil rights movement and the black power movement, we have bled and died, yet we are still dealing with this issue,” she said.

“The problem continues to be white supremacy and white privilege. People don’t want to acknowledge that we have a system that privileges whiteness and that the playing field is not even.”

She added that demonstrators must “keep the pressure on” and that she hopes the protests continue throughout the country. She praised the state’s attorney for her decision to charge officers in the death of Gray.

Among the speakers was Cephus Johnson, the uncle of Oscar Grant.

Grant, a black 22-year-old, was killed in California when he was shot by a transit officer who said he meant to use his Taser rather than his gun to subdue Grant on New Year’s Day in 2009.

“I’m standing with you in solidarity,” Johnson told the large crowd gathered in a grassy area in front of City Hall. “You can’t compromise. Those officers were wrong. …They need to be charged, convicted and sent to jail. …The whole racist criminal justice system has to be revamped.” 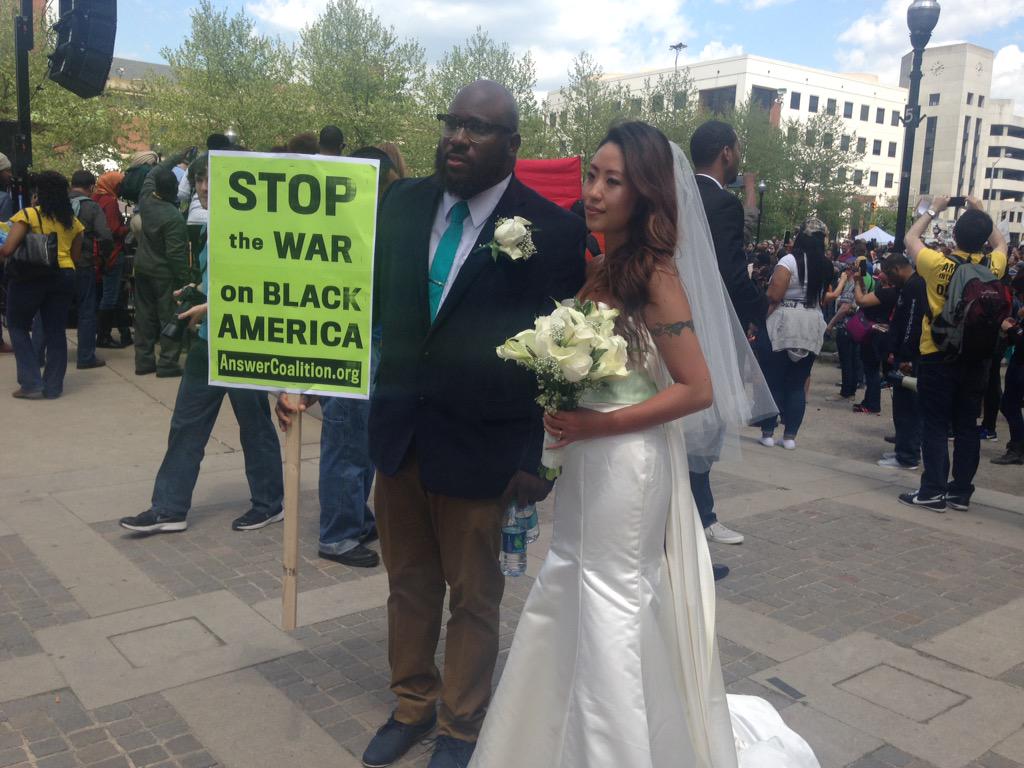 In anticipation of Saturday’s rally, law enforcement authorities erected barricades to block traffic around City Hall. Armored military vehicles were parked at the checkpoints, and there were large numbers of police and troops donning body armor, many carrying assault rifles.

At City Hall itself, there were dozens of police officers and members of the Guard.

Gov. Larry Hogan says he hopes to see the continuation of the four days of calm in the city that followed Monday’s violence.

Hogan said in a statement that the “right to demonstrate is a fundamental part of our society, but damaging property or putting innocent bystanders in danger will not be tolerated.”

Hogan thanked the Maryland National Guard, the Maryland State Police and local police from outside Baltimore for helping to keep the peace.

While jubilation appeared to be the mood in Baltimore’s streets Friday after State’s Attorney Marilyn Mosby announced the filing of charges, police reported 38 protest-related arrests and 15 curfew-violations arrests Friday night.

Gray family representatives said Friday they hoped the case served as motivation to reform the way police do their jobs in communities across the country and urged members of the public to express themselves peacefully.

The six officers charged in the death of Freddie Gray have been released on bond. While charges vary, one officer faces a second-degree murder charge. Three of the six officers are African American.
VPC

“We are satisfied with today’s charges,” said Richard Shipley, Gray’s stepfather. “These charges are an important step in getting justice for Freddie and we ask that whoever comes to our city — a city that we love, a city that we live in — come in peace, and if you are not coming in peace, please don’t come at all, because this city needs to get back to work.”

The Baltimore police officers union, however, says the six officers charged in the case aren’t responsible for Gray’s death.

Fraternal Order of Police Lodge 3 President Gene Ryan made the comment Friday in a letter to Mosby before she announced the charges. It was the union’s strongest statement to date in the officers’ defense.

“As tragic as this situation is, none of the officers involved are responsible for the death of Mr. Gray,” Ryan wrote. “To the contrary, at all times, each of the officers diligently balanced their obligations to protect Mr. Gray and discharge their duties to protect the public.”