Police are scouring a Moncton, N.B., neighbourhood and warning residents to stay in their homes as they hunt for a heavily armed man after three RCMP officers were killed and two were wounded in shootings Wednesday night.

Police said Thursday morning that the suspect has been spotted a few times in the manhunt, which began last night.

RCMP believe Justin Bourque, 24, is within an area bounded by Berry Mills Road, Killam Drive, Mountain Road and Evergreen Drive in the Pinehurst subdivision of Moncton.

Codiac RCMP Supt. Marlene Snowman told a news conference that police spotted the suspect three times Thursday morning — in the area near Gorge and Mountain roads, and two other times. The police were unable to apprehend him.

Roger Brown​, RCMP assistant commissioner, also told the news conference that “there is no way to describe the level of hurt” inside the police force.

He promised to keep the public updated on the situation throughout the day.

“This is working through your worst nightmare,” Brown said.

He said Moncton is still gripped by a “very, very dangerous situation.”

“We have an armed and dangerous individual that we do not exactly know where he is, and what that really means is that we need to collectively work together to ensure that nothing else happens, that we don’t have somebody else injured, whether it be a citizen, whether it be a bystander, whether it be another police officer,” Brown told the news conference.

RCMP Const. Damien Theriault said on CBC’s Information Morning in Moncton that people need to “stay inside for their own safety.”

“We need them to stay inside for their own safety,” Theriault told CBC.

The hunt started after police received a call at 7:20 p.m. AT Wednesday about a man wearing camouflage and carrying guns.

Additional police resources from across New Brunswick and Prince Edward Island are in Moncton to assist RCMP in the manhunt.

‘We are professionals and we have a job to do right now. We will have time to grieve after.’– RCMP Const. Damien Theriault

“And now we need to pull together and locate this individual as quickly as possible to ensure everyone’s safety.

“We are professionals and we have a job to do right now. We will have time to grieve after.”

The RCMP’s commanding officer in New Brunswick said on Thursday that he could not identify the officers who were killed or wounded. He said family members were in the process of being notified.

“We need to focus back on the families. We have one of our members with three children. And you know, these are, these are real-life situations,” he said.

Brown promised to keep the public informed of any developments in the Moncton manhunt.

“We will come back [to speak to the media] and once this person is apprehended, and he will be, then I think we, collective, I know from a policing perspective, we will breathe a sign of relief,” Brown said.

“But at this point in time, that’s not the situation right now.”

RCMP are searching every vehicle in the area, said CBC reporter Melissa Oakley.

“Two officers with rifles opened the doors to our van and the tail gate. Rifle aimed in the vehicle,” she reported. 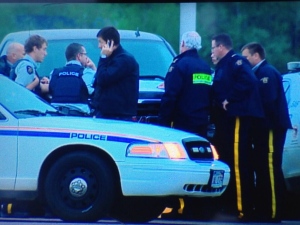 RCMP officers gather early Thursday morning as the search for Justin Bourque continues following the shooting deaths of three RCMP officers and the wounding of two others in Moncton, N.B. (CBC)

Theriault could not say how many police officers are involved in the manhunt.

Theriault, visibly emotional during a news conference early Thursday morning, also asked the public not to disclose any information about the police operation or locations of officers on social media.

The shootings have caused numerous closures or other action:

Moncton Mayor George LeBlanc said transit services and city hall were closed because of “potential risk from this person.”

“Naturally there’s a very high degree of concern and anxiety over this,” said Mayor George LeBlanc. “This is extraordinary.

‘Oh my God, there he is with camouflage and the headband and a gun, and it looked like a bow he had with him. And I mean he was just through our backyard.’– Joan MacAlpine-Stiles, Moncton resident and witnesssource

“It’s certainly not the type of thing that anybody is used to seeing.”

LeBlanc viewed the incident as “an extraordinary tragedy that nobody could foresee.”

“This is just a horrible tragedy for the city, but especially of course for the families of those officers, and of course it’s extremely difficult and I want to extend our deepest sympathies to them and our support for them in the days to come.”

Moncton Hospital staff said the two RCMP officers injured in the shooting are in stable condition.

The shooting has rattled people in Moncton’s north end.

Joan MacAlpine-Stiles said she saw the gunman when she went to open a window.

“It was really warm in the house, so we opened up the windows in the family room and there he was going across through the back with this rifle on his shoulder,” she said.

“I said, ‘Oh my God, there he is with camouflage and the headband and a gun, and it looked like a bow he had with him. And I mean he was just through our backyard.'”

Vanessa Bernatchez posted a video on Facebook from the moment the gunman opened fire, apparently killing an officer.

Watching from inside her living room with several others, Bernatchez said it appears the Mountie didn’t see the shooter until the gunfire erupted.

“It was too late, he went down. We knew it was over,” Bernatchez told CBC News Network.

On the video, a man describes what’s happening outside.

The video ends with her racing to the phone. Police and a tactical team arrived on the scene soon after, she said.

Will Njoku said he was emptying his dishwasher and putting his young children to bed just before 8 p.m. when he heard popping sounds.

“Within 30 seconds I heard sirens,” he said.

An RCMP cruiser’s window was shattered at the scene of the multiple shooting in Moncton, N.B. (Daniel St. Louis/Submitted)

Njoku said he heard five more shots after the sirens.

“We’re scared, obviously. We’re more terrified for the people who this shooter is basically in their backyard. I can picture these people’s houses,” he said.

When the news broke that there was a shooter on the loose, Njoku said, he went out on his street to warn his neighbours.

“I felt pretty dumb. But there was people going down there. I just know my neighbourhood. It’s just kid city,” he said.

In a statement on Wednesday night, New Brunswick Premier David Alward said: “I was shocked and saddened to learn of tonight’s tragic situation in Moncton.

“On behalf of all New Brunswickers, I would like to extend my thoughts and prayers to those affected.”

Employees of a grocery store in Moncton, N.B., lock down their store during the police manhunt for the gunman. (Marc Grandmaison/Canadian Press)

Alward said Thursday that all flags on provincial buildings are being lowered to half-mast in tribute to the fallen officers.

‘It is something I can’t fathom because it is not something that happens here. You think about it happening somewhere else.’– Premier David Alward

Alward told CBC News on Thursday morning that his immediate focus is on ensuring the gunman is captured, and did not want to discuss motives.

“We need to ensure that the suspect is apprehended, that is the first work that needs to be done. There will be ample time and opportunity to evaluate the why and ultimately the response that has taken place,” he said.

But the premier underscored the shock of the RCMP shootings in the southeastern New Brunswick city.

“It is something I can’t fathom because it is not something that happens here. You think about it happening somewhere else,” Alward said.

“As we move forward, we need to learn from it. Right now it is most important … to listen to the authorities in terms of public security.”

Prime Minister Stephen Harper is in Belgium for the G7 Summit, but commented on the shootings Thursday morning.

“I would just like to express all of our sorrow at the deaths of the three members of the RCMP killed last night in New Brunswick in the performance of their duties,” Harper said.

“This should obviously remind us that our men and women in law-enforcement put their lives on the line to serve and protect us as Canadians — and our thoughts and prayers are with the families of those killed and also the others wounded.”​

“This violent incident is a stark reminder that our men and women in law enforcement put their lives on the line in Canada every day to protect our citizens and communities,” he said.