“Is it a badge to kill? When is the mayor going to step up?” she asked. “When are we going to get some help?”

Jahmal Cole, who described himself as a spokesman for the organization My Block, My Hood, My City, said he is Jones’ nephew.

“What happened should matter to everyone,” he declared. “Everyone was celebrating Christmas like any other family. She should not have to be shot down just coming to the door. Your family does not want to wake up to news like this.”

Police say the incident began when the teen threatened his father with an aluminum bat. The father called police and then called his downstairs neighbor, Jones, to open the door when officers arrived, CNN affiliate WLS reported.

When police arrived, LeGrier was charging down the stairs still carrying the bat, the affiliate reported. Police opened fire, and both LeGrier and Jones were shot.

The Cook County Medical Examiner told CNN on Sunday that Jones died of a gunshot wound to the chest and LeGrier died of multiple gunshot wounds. Both deaths were ruled homicides, the medical examiner said. Other details were not released.

“An innocent lady got shot as well because the police were trigger happy,” Cooksey told WLS. “I went to the hospital. My son has seven bullet holes in him.”

“Stop disparaging his character,” she pleaded Sunday. “He does not have mental issues. He was an honors student.”

Jacquel Walker says she knew Bettie Jones well. “We planned together everyday,” she told reporters. “It hurts my heart to see that she was shot down. It was tragic. Why you got to shoot first and ask questions later?” she asked. “Why not use Tasers?”

Jones was a grandmother who loved church and music, WLS reported.

“We should not be here right now,” Cole chimed in. “A 19-year-old honor student was shot down by police — taken away from his family — and he didn’t have a gun. That is a problem,” he said.

“What do you want?” a reporter asked.

“Justice,” was the reply, almost in unison, as all the men gathered around the microphone.

“There will be no standing down while the police kill our women and children,” proclaimed Mark Carter, who said he was there to support the families.

He said there is a mental health crisis within the Chicago Police Department. “A lot of people with mental problems are drawn to this work. Everyone is not meant to be a police officer.”

In a tone decidedly more defiant than other participants, Carter said, “You are calling for an act of war and that’s what you’ll get. You are crossing a line that you do not want to deal with in this city if you keep killing our children.”

Emanuel’s office released a statement after the shooting.

“Anytime an officer uses force the public deserves answers, and regardless of the circumstances, we all grieve anytime there is a loss of life in our city,” the statement read.

“All evidence will be shared with the Cook County State’s Attorney’s Office for additional review in the days ahead.”

The shooting came two days after protests against Chicago police officers’ actions — including the killing of black teenager Laquan McDonald — shut down parts of the Magnificent Mile, a high-end shopping district in the city. 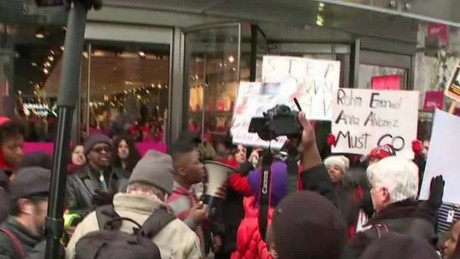 “Sixteen shots and a cover-up!” the Christmas Eve protesters chanted.

They were referring to the fact it took 13 months before authorities released surveillance video of the 17-year-old’s shooting. Jason Van Dyke, the white Chicago police officer who killed the teenager, was charged with first-degree murder. Van Dyke — who has a history of complaints against him, mostly for excessive force — has pleaded not guilty.

That case contributed to Garry McCarthy losing his job as Chicago’s police superintendent and spurred calls for Emanuel to resign. The graphic nature of the video, in which Van Dyke is shown shooting McDonald not long after arriving on the scene, didn’t help. Nor did the fact that this footage didn’t square with other officers’ accounts on the scene. 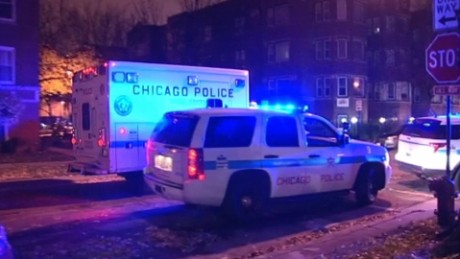 Homicides overall, not just officer-involved shootings, have been a major issue in Chicago. The city has had more homicides in the past few years than New York and Los Angeles, which are more populous cities.

Emanuel acknowledged the public discontent in a speech earlier this month, saying his city needs “a painful and honest reckoning into what went wrong” in the McDonald case and beyond.

The mayor has already welcomed a U.S. Justice Department investigation into whether Chicago police have made a habit of violating the law.

“We will be a better city for it,” Emanuel said. “It is in our self-interest, because we need (federal) assistance to make the fundamental and necessary changes.”