— New York snowfall forecasts have increased — 16 inches “is not out of the question,” CNN Meteorologist Derek Van Dam said.

— Philadelphia is suspending much of its public transportation for Saturday.

— Philadelphia has issued a code blue for overnight Friday into Saturday. This means anyone who spots homeless people out in the cold should call the police, who will take them to a shelter.

In the unrelenting snow, Dani Garner sat stuck in her minivan for eight hours on an interstate in Kentucky. Lines of stranded cars and trucks snaked ahead and behind her. Her husband, their three children ages 2, 3 and 14, and her mother-in-law were in the car.

“We’ve got no food or water,” she told CNN. Luckily, Garner and her family had gas in their tank and could run the heater. “Honestly, if my van wasn’t heated up I’d probably be boxed in with ice right now.”

A stretch of Interstate 75 had frozen over, Kentucky State Police said. Police could not say how many people were stranded, but images on social media showed a highway resembling a long parking lot. 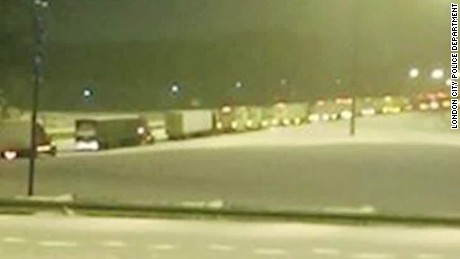 Among those trapped is Caitlin Centner, a reporter for CNN affiliate WKYT.

She’s been on the highway since 5:30 p.m. Friday and had “not moved a single inch since” when she spoke to CNN early Saturday morning.

Centner said she can see more than 100 cars for about a half-mile ahead of her. People nearby are running out of gas, and many have been without food and water for a long time.

She met a family, also stuck, that was traveling from Detroit to Georgia for a funeral Saturday morning.

A snow plow driver in Fairfax, Virginia, told CNN that the storm is “starting to get worse. It’s pretty thick. This is an all new experience for us.”

Snow. Lots and lots of snow.

From midnight until noon Saturday, the forecast shows snowfall rates could potentially reach 10 inches every six hours, according to Chris Geldart of the District of Columbia’s emergency management agency.

The snow arrived in Washington in the afternoon and quickly intensified, with 2½ feet possible by the time the last flakes fall Saturday night, the mayor said.

The storm could be the largest in Washington’s history, and will probably rank in the top 5 in terms of snowfall accumulation.

Baltimore may get 19-29 inches between Friday and Saturday night, according to the National Weather Service. The agency tweeted that worst of the storm will run from 1 a.m. to 1 p.m. on Saturday.

Hurricane force wind gusts will be possible Saturday along the Eastern Seaboard, with moderate flooding likely.

Also a concern: the wind, which could reach up to 50 mph or higher, sleet and black ice, which is affecting roads in North Carolina, according to the state’s department of transportation.

We all know those folks who fly down the road, no matter the conditions. Officials don’t want them — or anyone else — on the roads this weekend.

In Washington, Mayor Muriel Bowser spared no words in a warning to residents about the oncoming storm.

“It has life and death implications, and (people) should treat it that way,” she said. “People should hunker down, shelter in place and stay off the roads.”

“People need to understand the gravity of what is coming our way,” said Geldart of the District of Columbia’s emergency management agency. “This is a dangerous storm. It is time to be indoors.”

Why milk, bread and toilet paper when it snows?

As the storm’s impact widens as it moves north, power outages are expected to soar.

Most airports in the Mid-Atlantic virtually were shut down. United Airlines, for instance, said operations at Dulles and D.C. metro airports were suspended, with plans to resume limited flights on Sunday night.

Public transportation and train travel felt the storm’s effects too. Mass transit services in Washington and Baltimore have been suspended for the weekend. And some Amtrak service to and from the East Coast has either been canceled or truncated.

To top it off, the winter storm has forced postponement of hundreds of events — including NBA games in Philadelphia and Washington, plus an NHL contest in the nation’s capital, as well as a rally for the Carolina Panthers ahead of their NFC professional football championship in Charlotte.

Snowstorm not altering plans for the NFC Championship Game in Charlotte

Though the game between the New York Rangers and Carolina Hurricanes went on as planned, it doesn’t look like many people showed up from pictures inside the arena.